Response to BBC Newsnights’s “What is Twitch?” #

The best gaming moments are social — we like sharing our experiences with others. I remember playing SimCity 2000 for hours together with a friend in São Paulo. I’d have the controls while he sat next to me and discussed the computer simulation before us.

World Peace is None of Your Business #

Morrissey’s fantastic new album. A sustained shout of protest to our world. Favorites songs so far are World Peace Is None of Your Business, I’m Not a Man, Istanbul, Kick the Bride Down the Aisle, One of Our Own, Drag the River and Art Hounds.

Add “gif” to the beginning of any youtube.com URL.

Elite The Game That Changed The World #

Why Racket, Why Lisp #

The itch to try a new programming language is there again. Racket seems a good choice, which I might explore using the Pollen publishing system that is written in Racket:

At the core of Pollen is an argument:

That’s what Pollen is for.

On the Shortness of Life #

The majority of mortals, Paulinus, complain bitterly of the spitefulness of Nature, because we are born for a brief span of life, because even this space that has been granted to us rushes by so speedily and so swiftly that all save a very few find life at an end just when they are getting ready to live. Nor is it merely the common herd and the unthinking crowd that bemoan what is, as men deem it, an universal ill; the same feeling has called forth complaint also from men who were famous. It was this that made the greatest of physicians exclaim that “life is short, art is long;” it was this that led Aristotle, while expostulating with Nature, to enter an indictment most unbecoming to a wise man—that, in point of age, she has shown such favour to animals that they drag out five or ten lifetimes, but that a much shorter limit is fixed for man, though he is born for so many and such great achievements. It is not that we have a short space of time, but that we waste much of it. Life is long enough, and it has been given in sufficiently generous measure to allow the accomplishment of the very greatest things if the whole of it is well invested. But when it is squandered in luxury and carelessness, when it is devoted to no good end, forced at last by the ultimate necessity we perceive that it has passed away before we were aware that it was passing. So it is—the life we receive is not short, but we make it so, nor do we have any lack of it, but are wasteful of it. Just as great and princely wealth is scattered in a moment when it comes into the hands of a bad owner, while wealth however limited, if it is entrusted to a good guardian, increases by use, so our life is amply long for him who orders it properly.

Email Is Still the Best Thing on the Internet #

Whatever service you use to communicate non-ephemerally on the internet, an email address is needed to do it.

This is not the first time I mention the work of Eric Sachs of Google’s Identity team:

Then during the early 90s, a “hack” was found that created the foundation of most user account systems on the web. That “hack” was the idea of logging into a website with your email address, and proving you were the owner of that email address by having the site send you an SMTP message with a hyperlink back to the site which contained a long code. For the few of us who considered ourselves identity geeks at the time, this did not seem like an approach that would last a long time. Even SMTP seemed like a fad when we already had high end systems like Lotus Notes relying on things like PKI, digital certifications, signing, encryption, etc.

However twenty years later, that “hack” is still the most powerful technique that we rely on to build user account systems. From a purist perspective, emails have some downsides as identifiers. Much of this guide will discuss those downsides, and how to handle them. However nothing else, even phone numbers or social network IDs, has come even close to being as powerful an identifier.

And what hurts is the steadily diminishing humanity of those fighting to hold jobs they don’t want but fear the alternative worse. People simply empty out. They are bodies with fearful and obedient minds. The color leaves the eye. The voice becomes ugly. And the body. The hair. The fingernails. The shoes. Everything does.

As a young man I could not believe that people could give their lives over to those conditions. As an old man, I still can’t believe it. What do they do it for? Sex? TV? An automobile on monthly payments? Or children? Children who are just going to do the same things that they did?

NASA’s Kepler mission has discovered more than 950 confirmed planets orbiting distant stars. Planets with a known size and orbit are shown below, including Kepler 186f, an Earth-size planet in the habitable zone.

Exciting times to be alive. I look forward to comets in Elite: Dangerous! Update: BBC article with images of the comet released by the European Space Agency, a detailed New York Times article with details of the Rosetta’s mission, including the fact that it has spent 10 years flying to get to this point, and more information on the Rosetta blog. 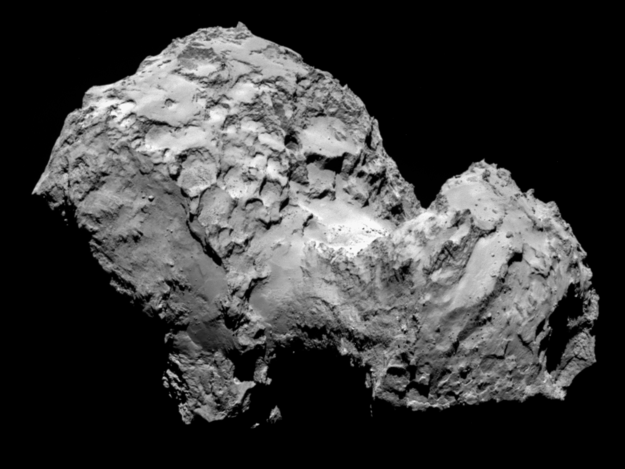 On Rap Genius, which is now just called ‘Genius’.