Butterflies and Boxes in Death Stranding 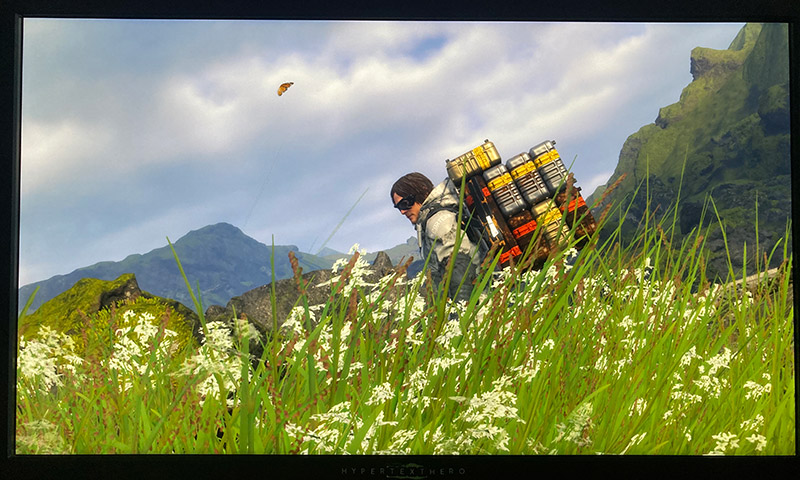 The first photo I took in Hideo Kojima’s new video game, film, social distance and delivery work simulator Death Stranding where you are a deliveryman in a post-apocalyptic United States.

The country is haunted by invisible dead with oily umbilical cords who can be detected by a baby you carry with you in an artificial womb while you avoid rain that seemingly speeds up time and can age plants and human skin with one drop.

The game so far is about as weird and beautiful and overdramatic as Metal Gear Solid V, telling bizarre, heavy stories with touches of humor, levity, and references to American popular culture.

Your avatar is a fairly serious guy called Samuel “Sam” Porter Bridges and the theme song has the words “Don’t be so serious”, which is about as overwrought as “Butterflies and Boxes” in the title here along with the picture of Sam carrying his boxes with a butterfly fluttering nearby.

The second mission — or the third? I don’t remember because I am not sure if a cut-scene counts as a mission — has you carrying a dead relative to an incinerator, for instance, and I have met a doctor named Deadman and a military man named Die-Hardman. 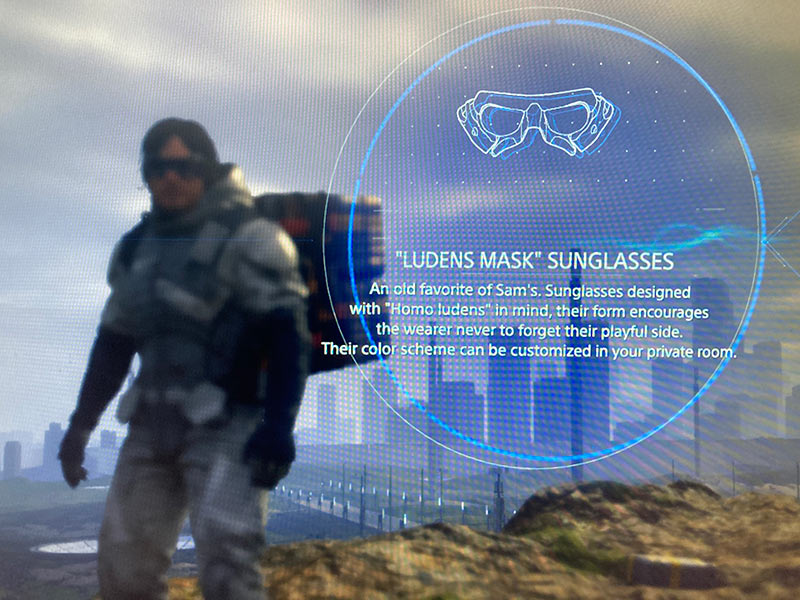 Details like the “Ludens Mask” Sunglasses that reference real world works, in this case Johan Huizinga’s classic book about play Homo Ludens: A Study of the Play-Element in Culture, are a fixture and one of the joys of Kojima’s games.

Though I have not read the book L.B. Jeffries’ overview makes it seem like a rich source of ideas for the bespectacled game designer, mixing language, philosophy and play:

With their intrinsic connection to language, philosophy and poetry take on a generative function. Language and writing typically wear down the meaning of words and symbols into nothing through constant use. Poetry and play counter these more basic forms of communication by constantly infusing new meanings into familiar concepts. Philosophy began as a riddle game, which then melded with the ritual and festival. It slowly connects with higher play as it begins to study the nature of truth while simultaneously developing at a lower level as intellectualism and sophistical quackery. One is what we’d consider philosophy, the other is poetry extended out from the riddle games of old. Problems with philosophy begin to develop when a culture fails to distinguish between play and knowledge, like the Stoics thinking a word pun or grammatical pitfall is actually an intellectual dilemma (152). This continued de-evolution in the education process persisted as education turned into very rule based exchanges. You were either for or against an academic’s ideas. You had to cite previous philosophers or be rejected outright. Education suffered because the competitive element began to oust the generative function of play (156).

It is now in my to-read list, and as an aside, I think Huizinga is one of the “researchers” that John Cleese mentions in his talk on creativity.

So, just some brief, random thoughts about the game so far, which has me in its grip even though my avatar is not a hunter.

Prior entry: Inefficiency is Human
Next entry: Crossroads