Update 2019-10-18: Earlier this week I managed to speak with a Norwegian Airlines representative by calling +1 (800) 357-4159 during European office hours (9–5pm CET) and was informed there is a long backlog of claims they are working through, and that it would be three more weeks before a response to mine (I gave the incident number and they confirmed the claim was in the system). I will update this post again later in November 2019.

Update 2019-09-11: I found this page on Norwegian Airlines’ website that lets you upload receipts and make claims for the affected flights. I just submitted a claim for a refund for the Air Canada flight ticket I needed to buy to get from Gander to Rome and received a confirmation email and incident number. I will update this post if I receive the refund.

Last Thursday, September 5th, 2019, I boarded a Norwegian Airlines flight operated by euroAtlantic Airways from Newark Liberty (EWR) headed to Rome Fiumicino (FCO). The flight was diverted to Gander International Airport (YQX) in Newfoundland for an emergency landing before beginning its crossing of the North Atlantic ocean. It was a frightening experience, and I am happy that the pilot got us down in one piece, and upset about the lack of information given by Norwegian Airlines about the ordeal. 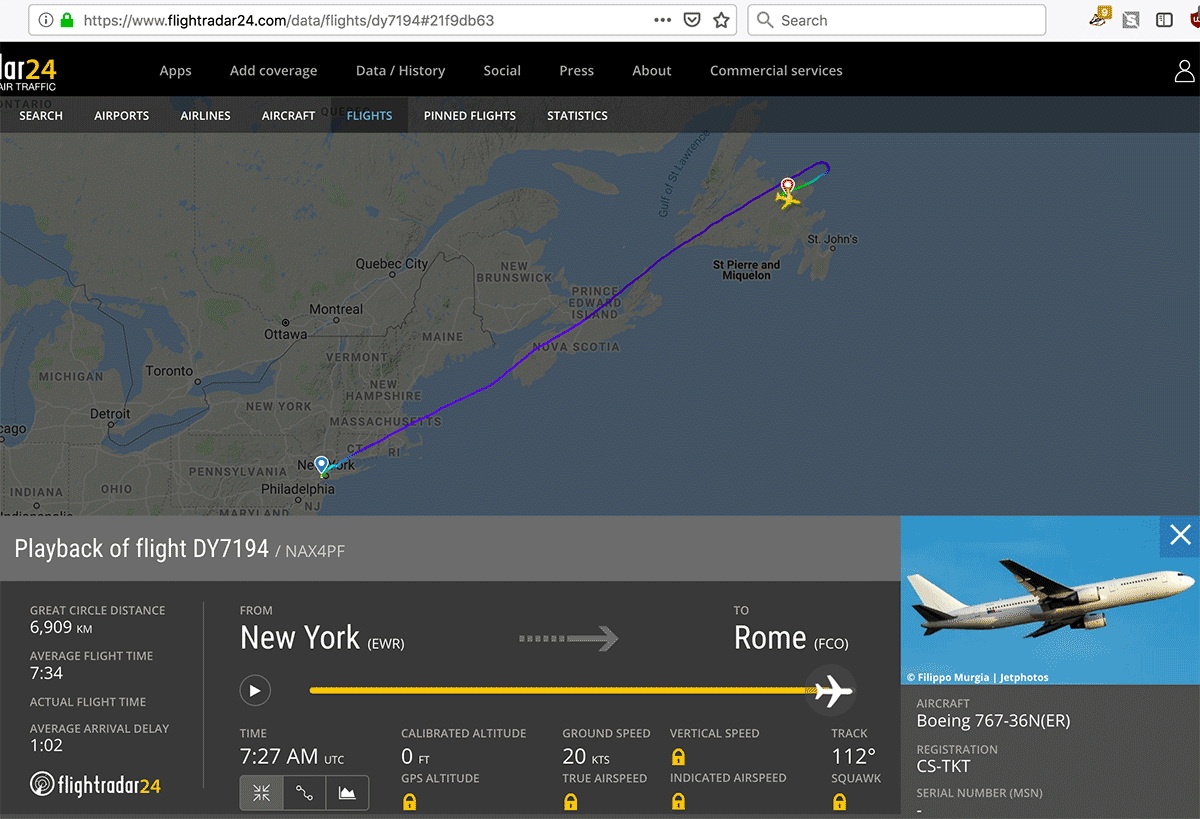 The DY7194 flight track as seen on FlightRadar24.

The aircraft was one hour late taking off from EWR. As I approached the plane, while on the ramp before boarding, there was a faint urine smell, and when I entered the plane, I found the smell was coming from inside.

Despite this, I was happy to see that my seat, 25D, has plenty of space in front of it, as 4 seats in the the center row #24 were missing. The people who seemed to have been assigned the missing seats were not delighted, but the young cabin attendant crew (not one seemed older than 19 or 20 years old), sorted things out and found other seats for them.

Around 3 hours into the flight, during dinner, a garbled message from the cockpit was announced over the intercom:

Some of the flight attendants began speaking on the wall phones, while others began moving quickly around the cabin, telling people to put their food trays under the seats, close the tray tables, and put on seatbelts.

Looking around the cabin I saw many people naturally becoming quite concerned. A passenger asked one of the attendants if there was a problem, and the attendant answered, “We are still flying, so I think we are okay!”

I then heard a sudden quietening of the engine sound, and experienced a feeling of weightlessness for a few moments, which I later realized was probably the plane making a sharp turn. I seemed to feel we descending quite rapidly, and my ears began to pop periodically.

People around me started to look at each other, and I saw fear in many passengers’ eyes. I tried to calm a few by speaking with them and telling some jokes, but my thoughts were “I better do what I can to prepare for a water landing”, and tried remembering the location of life vests and emergency exits. 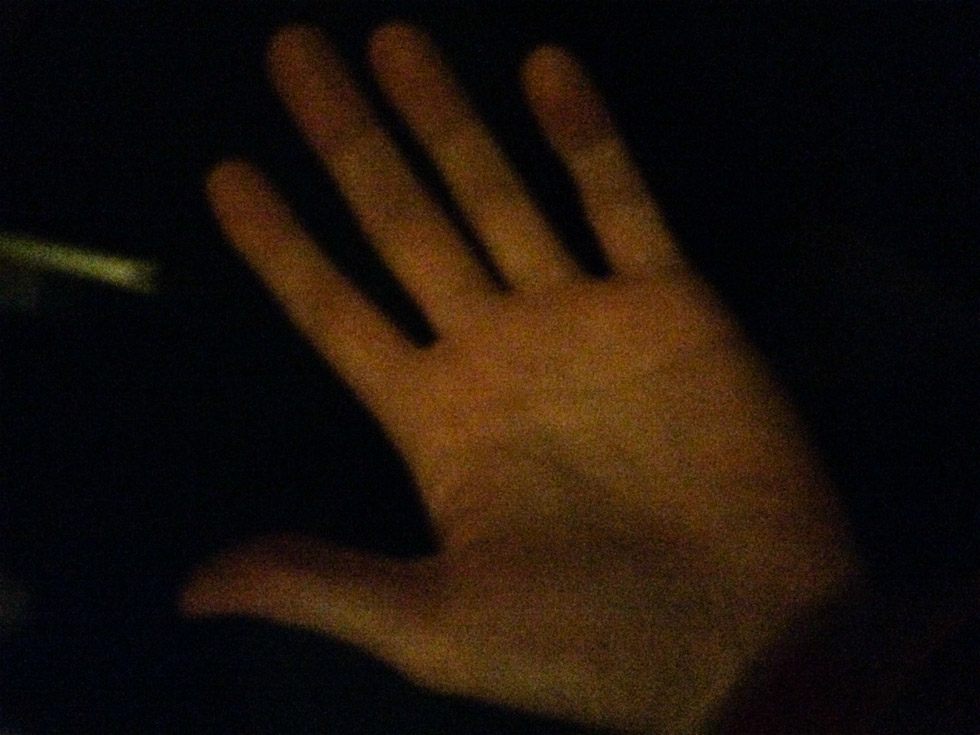 A phone photo of my hand I took during the flight.

The intercom was activated and more garbled static sounds were transmitted into the cabin a few times, but no words. Then, suddenly, a curt message over static, from the pilot:

I kept trying to look out across the other seats to see out the windows, and was happy to see spots of light in the darkness outside. We were very low, and all at once I could see flashing lights from fire engines and ambulances lining the runway.

The landing was quite hard but everything stayed in one piece and loud clapping and cheering erupted from the cabin. The passengers were looking out the windows at the various emergency vehicles with their flashing lights around the airport. 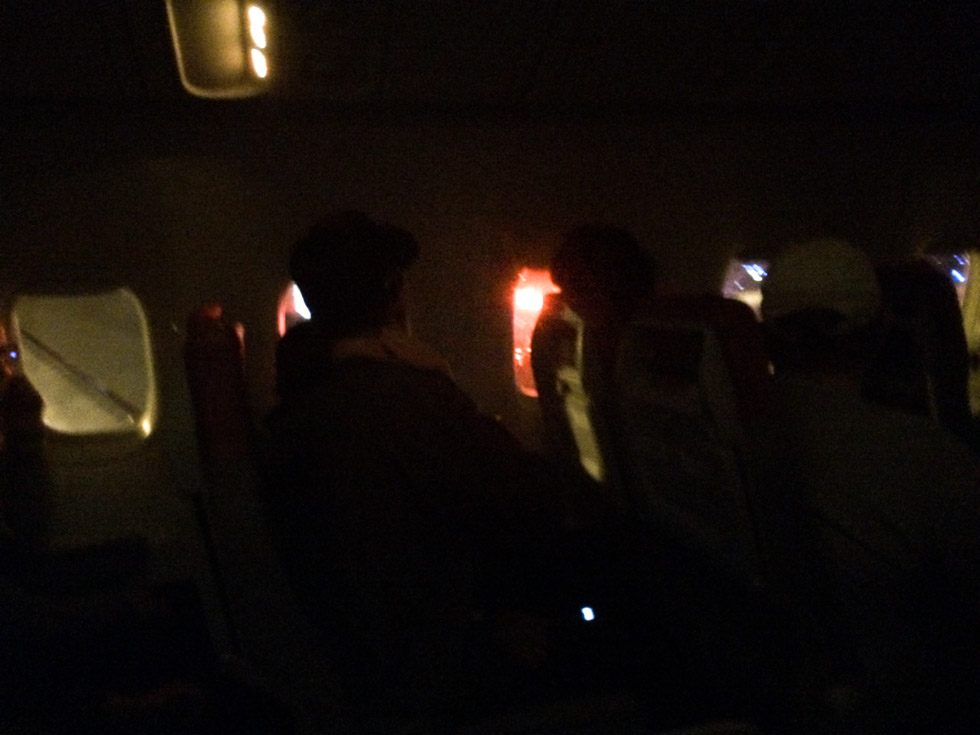 The intercom crackled to life and the pilots voice came through, but the only thing I remember him saying is:

I apologize for this landing.

As the plane slowed and turned onto a taxiway, I could hear a loud, grating noise, either from the landing gear, as if it were scraping the tarmac, and/or from the left engine.

I felt great relief when walking down the steps that were brought to the airplane, and felt happiness at being alive when we entered Gander Airport’s arrivals lounge.

The pilot and crew put on yellow vests, and made an announcement that they were organizing a hotel for us, and that we needed to be patient. The pilot walked around asking if there were questions, and answering as he could, but he would not give a reason for the emergency landing other than “technical problems”.

When pressed, he said there was a problem before the Atlantic crossing point, and was given the go-ahead to cross, but the problem persisted as he passed over the Newfoundland coast, so he decided to call Mayday and turn back to land at Gander. 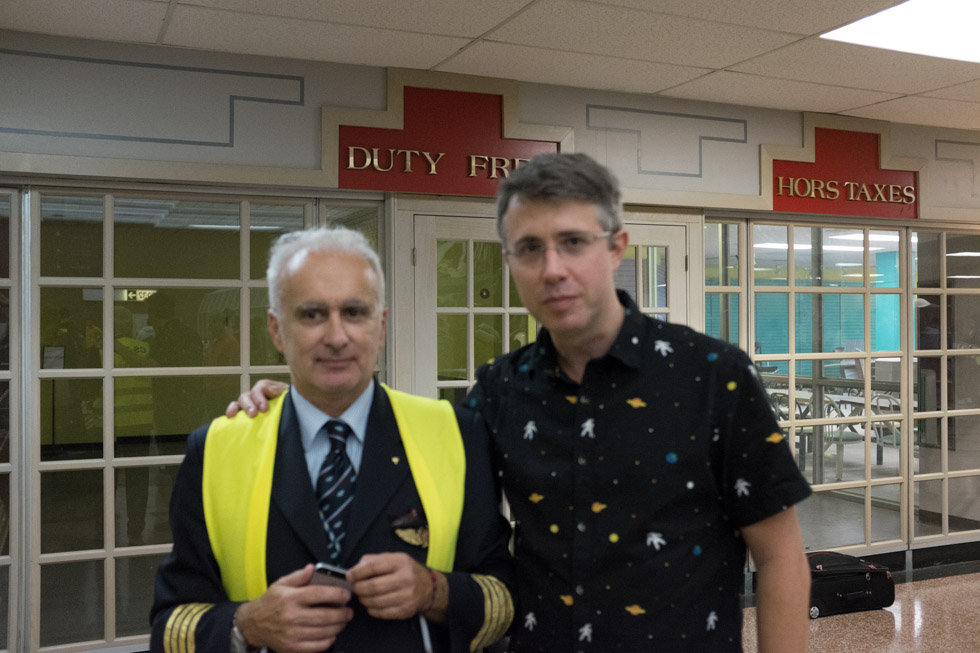 I asked a passenger to take a picture of me with the pilot, who I thanked for the landing he apologized for.

We spent around 5 hours in the arrivals lounge before we could go through immigration.

After clearing immigration, we were given 3 vouchers, by people in the main airport lounge, for breakfast at the airport, for dinner in Gander, and for a stay and next-day breakfast at a hotel. Buses to various hotels in Gander were organized, though it took some time and a few passengers chose to take taxis.

The only information we received from Norwegian Airlines were a few text messages like the following:

We’re sorry for the disruption to your Norwegian flight DY7194 from Newark (EWR) to Rome (FCO)04.09.2019 23:30. We have technicians working on the aircraft and we will send new information about departure time as soon as we know. To read about your rights, visit www.norwegian.com/rights. For support, please call us on 1-800-357-4159.Other conditions may apply to tickets booked as part of a package or booked through a travel agency.

I slept for a couple of hours, but no more. The hotel, dinner and next-day breakfast vouchers made me think we would stay in Gander overnight, but at around 7:30pm, as I was about to eat dinner with some other passengers at Legends, the bar near the hotels we were staying at, someone who worked at the bar came to our table and said she received a message from one of the hotels that Norwegian Airlines informed them that passengers were to head back to the hotel, pack, and prepare to board buses back to the airport for a midnight flight out.

We did so, and when we arrived at the airport a large crowed formed around the check in line to get tickets. I was tired, and concerned about getting into same airplane since there were no information or assurances from the airline other than cryptic text messages such as the following:

After asking around, it seemed we were getting back in the same aircraft we landed in, but I could not get a clear answer whether the flight crew would be the same. I could not see a flight crew or the pilot in the airport lounge, and after getting my new hand-written boarding pass, I did not feel comfortable with the situation. 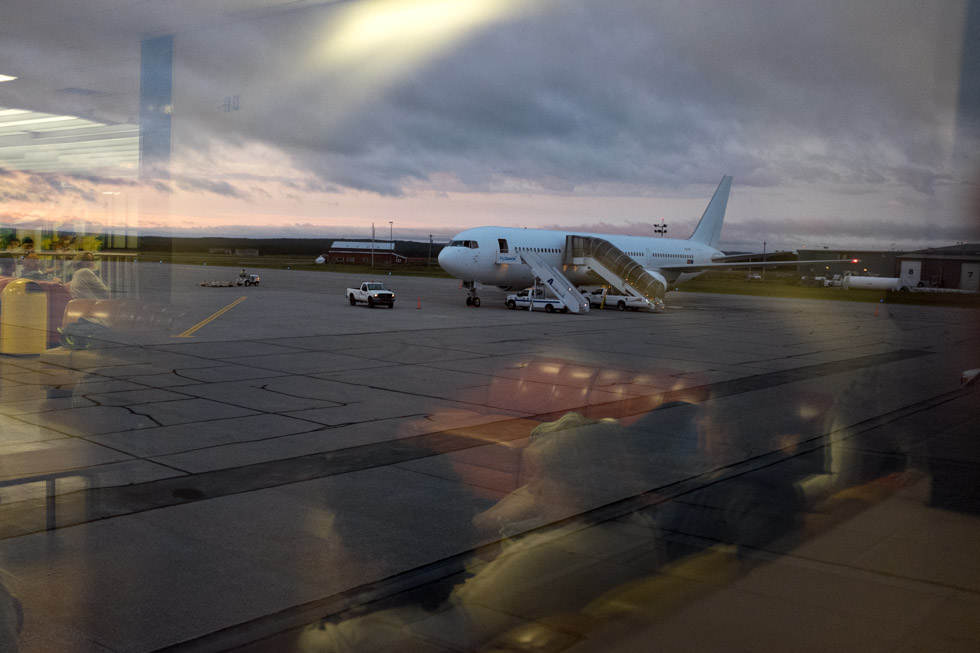 Very tired, and seeing the amount of upset people in the airport, I decided not to board the flight. I told the attendants I was not going to be boarding, and returned to the hotel in a taxi.

When I arrived back at the Comfort Inn, the staff told me I would have to pay for an extra day but I refused, and told them the airline had already paid and that I was exhausted and wanted to go back to my room to sleep. They agreed.

A few hours later I was woken by a text message saying the flight was delayed until 3am, and thought about the people shuttled back to airport, waiting, still. I hoped their flight, if it took off, would be uneventful, and that they would reach Rome safely. 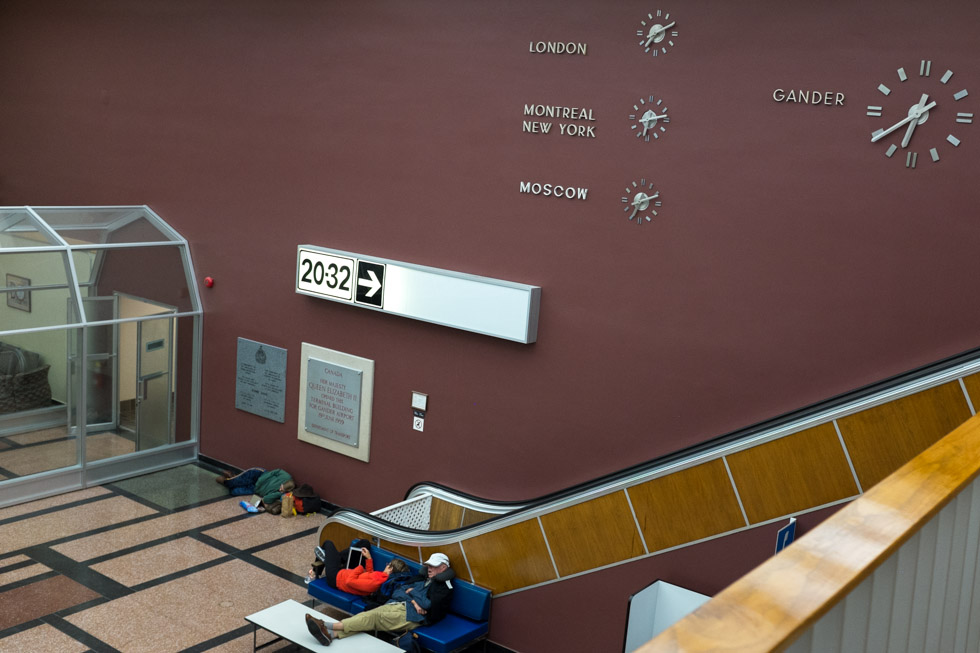 Passengers sleeping in the Departures Lounge at Gander International Airport.

The next day I bought a $1300 USD Air Canada flight from Gander to Toronto, then Montreal, then to Rome, where I arrived the following day, on Saturday morning.

I have written to Norwegian Airlines asking for, at the very least, a full refund for the entire trip as compensation. I tried calling throughout my stay in Gander, but always remained on hold and could not get through to speak to someone.

I realize that things go wrong, and am thankful for the pilot’s safe landing, but I am disappointed at the lack of information provided by Norwegian Airlines. What happened to the airplane? What was the “technical issue”? They should have told us more so that we could make an informed decision instead of pushing passengers around blind throughout the experience of the diversion and emergency landing, especially given the issues the unlucky airline has been having recently, including another diverted flight to Dublin the same evening.

The people of Gander, including hotel and airport staff, were all very nice and polite, and I thank them for their hospitality.

I will continue to attempt contacting Norwegian Airlines and will update this post with new information if there is a reply. I can be contacted at simon@hypertexthero.com.

Prior entry: Aircraft Carrier Landing 1986 vs 2019
Next entry: See a Satellite Tonight, No Telescope Required