Depress that Escape key on your keyboard or the button near the center of your video game or television controller. Let the battery in your phone die. Observe the face of the monsters on the screen disappear when the thing that created them is turned off, or the face of the person nagging you after you tell them: Shut up.

The moment in front of you. Do you see it? Do you care?

In the pause in compulsions to work hard long hours around much of the world those of us already inclined to beat their wings as little as possible tend to daydream and maybe remember places in computer video games where we, paused. 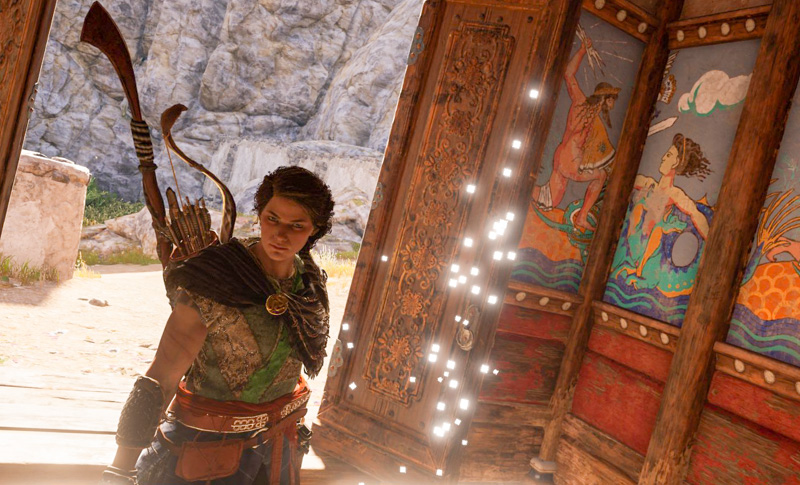 Lovely as they are it was not Kassandra or beautiful land and seascapes she traverses like a goddess in Assassin’s Creed Odyssey, or all the detailed artwork throughout, that made me pause.

And it was not Photo Mode, that having been introduced in the prior AC Origins has almost kept me from finishing the games since I spent as much time pausing and moving the camera around to take photos as playing (James Cameron is jealous of Photo Mode).

No, what made me pause was having the choice to play the same story as a man or a woman, which doubled the audience of a well-written, gorgeous action role-playing game at an important time in the real world.

But I did not pause because of trouble choosing. I paused because I was surprised the people in charge of a large organization let it happen.

It is refreshing to play a new “AAA-studio” game where you are not constantly staring at a gruff man’s back, and Kassandra is the best lead character in any media — books, films, and video games — in a very long time.

Bravo, Ubisoft, also for employing so many artists to create such digital world concertos. 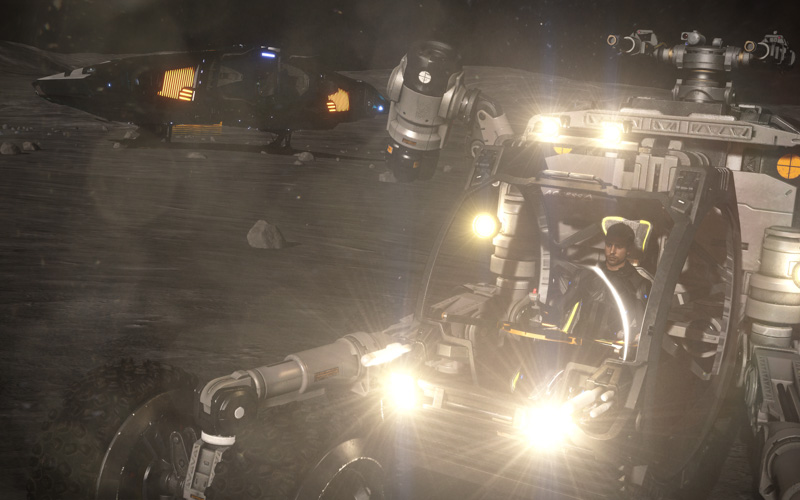 Even in its early stages Elite: Dangerous was clearly something special. Maybe it was partly because of my altered state of mind then, but I spent a lot of time just listening to the music and the sound in the game, that makes you feel like you are really flying a spaceship.

To pick one of so many moments of pause: Every time I open the galaxy map to plot a route and zoom into or out of the billions of stars in our galaxy, choose a star system, hover the cursor over an Earth-like world, and hear a bird, calling in an alien wilderness.

I hope we can land on green and blue planets, soon. 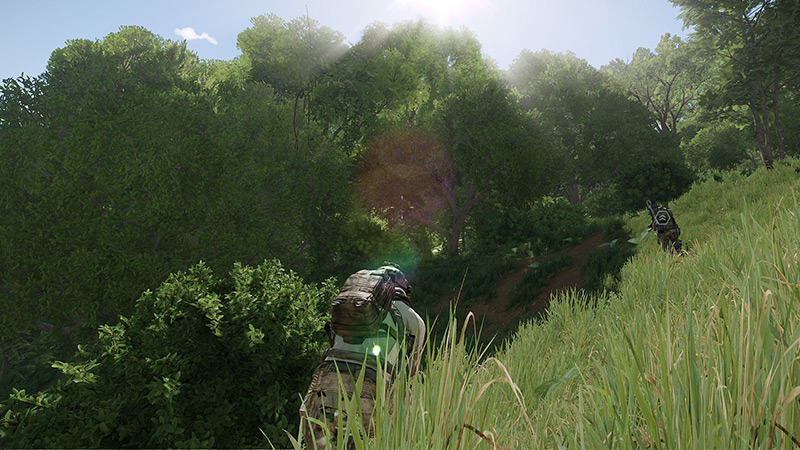 Another game with extraordinary sound design, Arma 3 makes me pause when I think I hear an armored vehicle or helicopter gunship approaching in distances that themselves are a part of this pause, for they give me time to pause.

Should I stay prone by this rock on the slope, take my chances in a bush in the middle of the field, or do I have time to run across and hide in the trees?

Is that movement that I see in the foliage?

The vehicle sounds much closer now. Is its turret pointing in my direction? Should I peek around the tree trunk? What do you all think we should do?

In Arma my friends and I (it is one of the very best cooperative multiplayer video games) have to pause and think in order to not die. 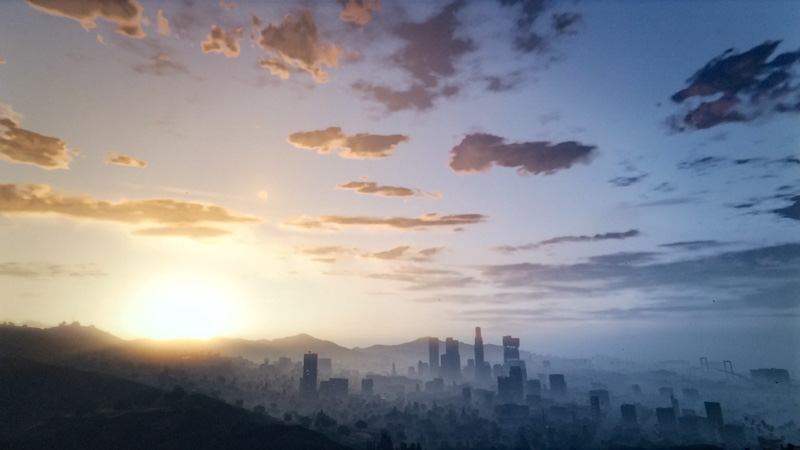 The first time I crested a hill and saw L.A., I mean, Los Santos, in Grand Theft Auto 5’s fluid world of movement and light I paused in wonder, and discovered that GTA5 (which you can get for free this week) is actually a tranquil screensaver disguised as an action game.

If you leave your avatar alone for some seconds the camera begins to pan around and show the beauty of a world hundreds of people brought to life.

Then I look for the nearest hill to vroom up and off of with the automobile I am driving.

GTA saved me from Road Rage when I used to commute by car, and more recently from Home Rage when hearing bad loud music blasted out of real cars with real assholes inside. Driving around with headphones in this video game is a therapeutic pause from the real world. 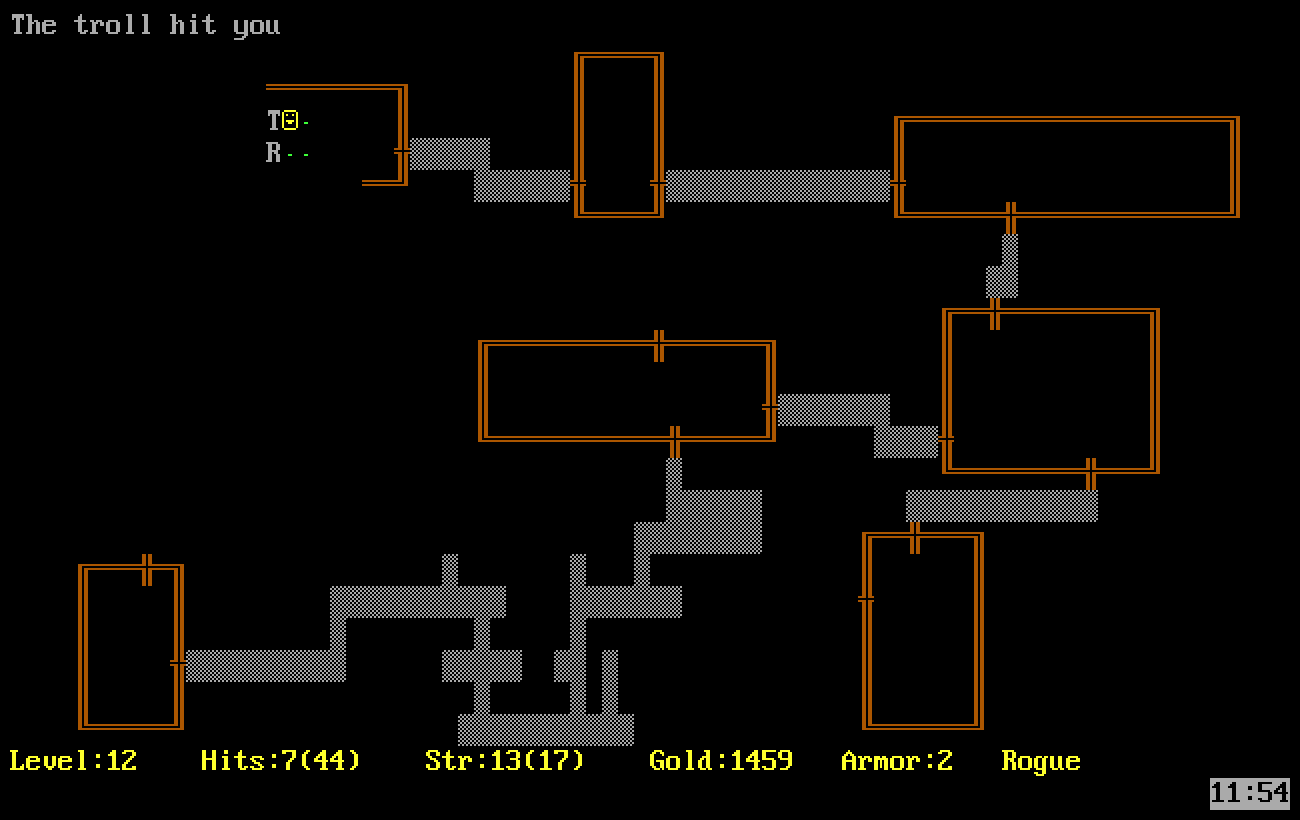 In Rogue pause is the default. The action only continues when pressing a key, then stops until another is pressed.

But the world appears to slow further when running into a capital “T” which stands for Troll and death, especially if trailed by a rattlesnake in darkness.

I pause to plan my next turn, perhaps my last.

Looking in my inventory I find an unidentified potion. I throw it at the Troll — that like the walls, I imagine is dark orange — and he is frozen! I run, looking for light. 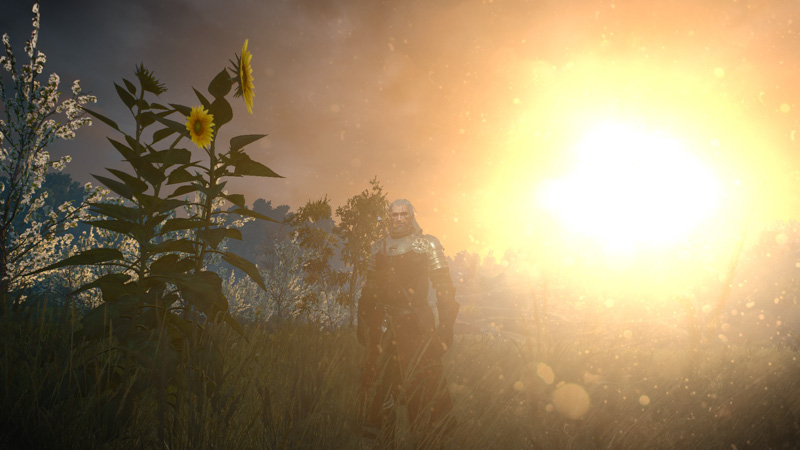 There are places of power in the real world where time seems to stop. One is the edge of a cliff overlooking the Mediterranen on an island in Tunisia where I went on a school trip as a teenager.

Approaching and looking over the edge, I felt the rushing wind in hair and face, and never forgot the moment.

In The Witcher 3: Wild Hunt too these places exist, but rather than named altars of rock, what stopped time was the movement of tree branches in a wild area with skies bathed in changing hues of deep colored sun, moon, and magic.

The wind is blowing.

Star Citizen should be named Star Groundhog Day at this point in its development as it always begins with the slide-show laggy frame-rate navigation of a bug-ridden city or outpost.

To open doors or access terminals I hold “F” for an “inner thought”, and wonder what’s the point.

Then I manage to reach my ship, takeoff, travel through hyperspace, enter a planet’s atmosphere and land on beautiful, desolate landscapes, where I realize that escaping the terrible pauses in the beginning was worth it, after all, in order to experience the meditative contemplation of the traversal of digital space worlds. 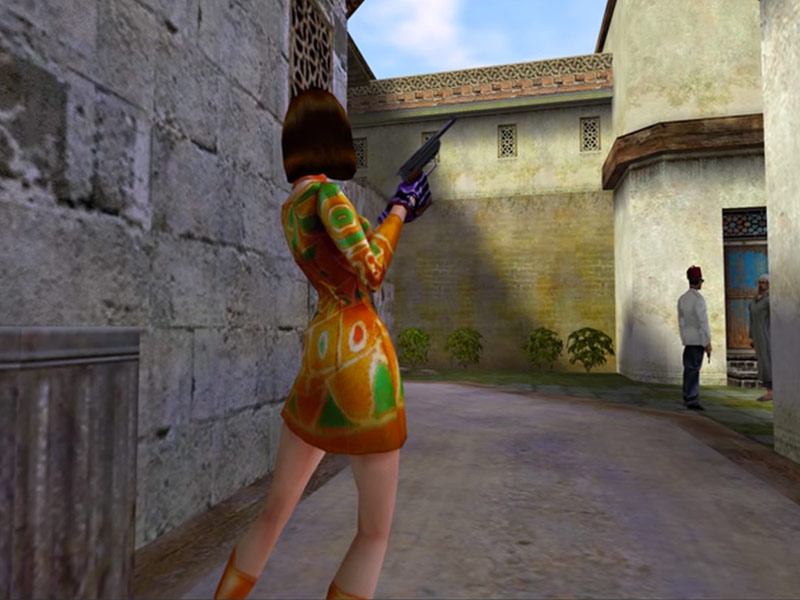 Humor: The thing we need much, much more of in the world.

People who lack a sense of humor are often responsible for calamities — and calamities are what we try to stop in the irreverent No One Lives Forever while pausing to listen to hapless bad mens’ dialogue, one of several pleasures in a wonderful video game making fun of various 1960’s Special Agents. 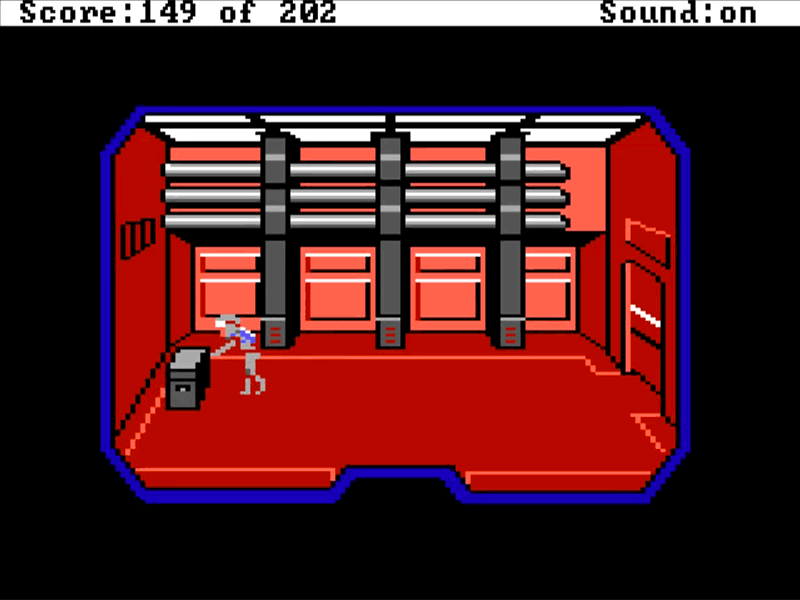 In Space Quest I paused to find the right word so I could finally push what I thought was a box, but in fact was a trunk.

I would have known to write “trunk” if I had been paying attention to the prior dialogue box, which mentioned a trunk.

But I am a daydreamer, and missed it. 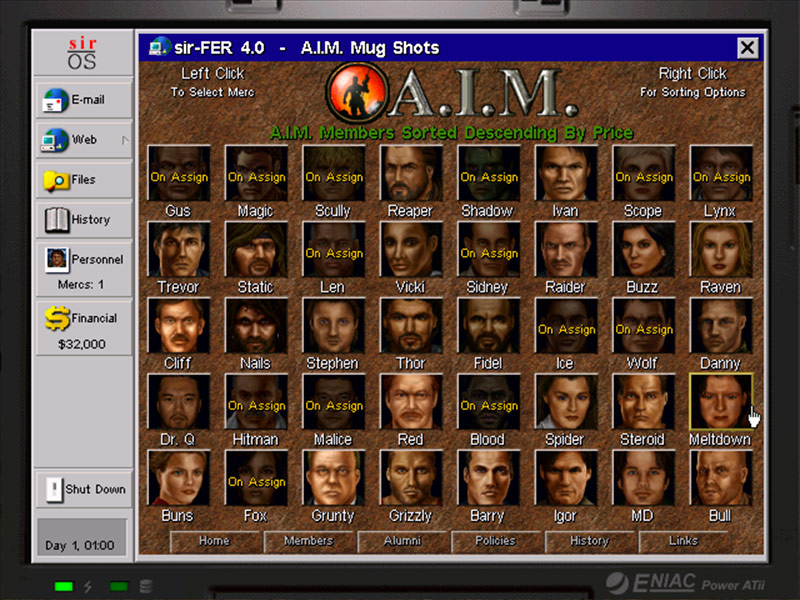 Once past Jagged Alliance 2’s old-school video introduction I found a computer interface simulating the world wide web of the 1990’s with Another Brick in the Wall and Miami Vice-like guitar riffs playing in the background.

What is this game?

A link to A.I.M. — Association of International Mercenaries — was in my in-game Web bookmarks. Time to hire some mercenaries? But who?

This hiring screen is a very small part of a video game with many intertwining systems, including the very best turn-based combat of any video game ever made, that I continue returning to 21 years later. 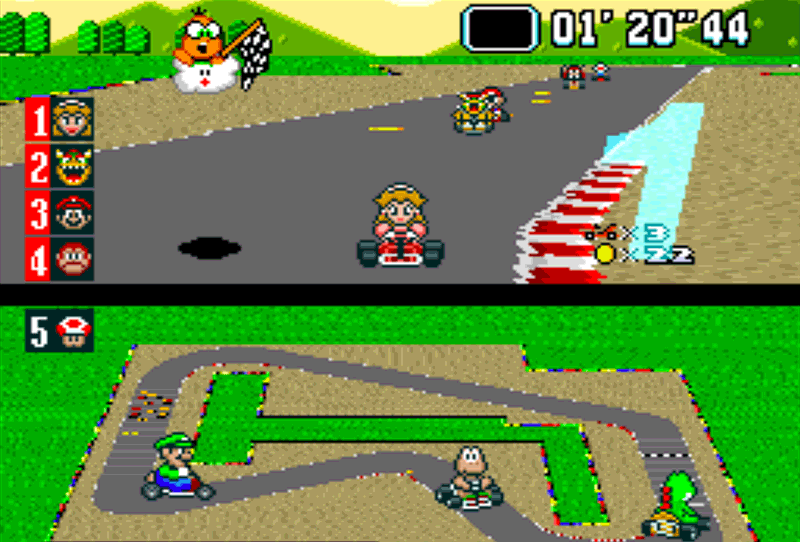 Finally, in Super Mario Kart I used to only find out my mind had paused when the race had finished — I forgot I was playing at all, and won!

My mind’s “normal” operation had somehow paused, and I was flowing, in the zone.

Let me now pause to consider this alternate title:

10 Videogames That Made You Pause.

If you enjoy reading please consider becoming a patron. Thank you to Amber Paulen for reading a rough draft of this.